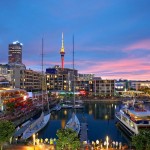 Auckland is the largest metropolitan area in both Polynesia and New Zealand, with a population of 1.45 million people. It is in the northern half of the North Island, on a narrow isthmus of land that joins the Northland peninsula to the rest of the North Island.

Arrive at Auckland International airport and shuttle bus transfer to your hotel. The rest of today is free on your own.

Travel south passing Hamilton, Te Awamutu, and Otorohanga, we arrive at Waitomo. Here we will embark on a boat and cruise into a grotto illuminated by countless of tiny glow worm suspended from the cave ceiling. Continue across Lake Karapiro, and Fitzgerald Glade, to the famous geothermal city of Rotorua for overnight stay.

This morning we depart Rotorua to the township of Matamata to do the Hobbiton movie set tour where the Lord of the Rings films and the new Hobbit movies are currently being filmed. After we return back to Rotorua around 1.30pm and the rest of the day is free on your own to enjoy the many optional activities available in Rotorua.

Travel north via Hamilton, New Zealand's fourth largest city and fertile Waikato region to the "The City of Sails" Auckland. At night, how about visiting the Sky City Casino?

Transfer to Auckland International Airport for your flight bound for home, taking with you unforgettable and pleasant memories of a wonderful of New Zealand.